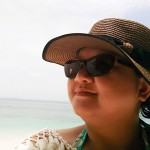 Gazing up at the Northern Lights in Norway

Gazing up at the Northern Lights (Aurora Borealis) is one of the most spectacular nature’s show that humans can witness. As is taking place on an 11-year solar cycle, it means that after 2016 the chances of seeing it will be smaller; so, I decided to fulfill my wish (also as a birthday present for myself) and go hunting it.

I was flying from Malaysia, my tropical home country with 35 degrees Celsius to the arctic zone with 0 degrees. I just couldn’t imagine this temperature gap could be so high, as I was instantly freezing the minute I landed.
Upon my arrival in Tromso Airport, my Airbnb host Kathrin has arranged someone to pick me up and drive me to her apartment; that’s a sample of Norwegian hospitality. It was a 25 minutes ride from the airoport to the place that was located on the other side of the city. And it had that million dollars view, indeed.

Stepping into Kathrin’s apartment, I could admire the Scandinavian design and good taste in terms of house decoration and furniture selection. The first thing I needed was a shower and some sleep, but Kathrin told me I should stay awake, as there’s a high chance of seeing the aurora borealis right in front of her balcony, a bit later that night.
Even though I was very sleepy, I got myself a coffee and sat down on a chair in the balcony. I decided to stay awake and to witness the event I was traveling to Europe for.
And there it was – after an hour or so, the first signs of the northern lights were displayed in front of my eyes.

I was so excited about how lucky I was to watch it already, but I felt there’s still something missing. What I witnessed was different from the books or internet’s pictures with aurora borealis. Kathrin solved the mystery for me: due to the city lights, the aurora can not be seen clearly from there and is better to join a tour that shall bring me outside the town in a darkness area, where the right spot to watch it was.
I chose Tromso, in Norway as the place to witness this unique sky show even though I was just recently back from one of the Scandinavian country.  Located in the heart of the Arctic wilderness, in the middle of Northern Lights Oval and surrounded by steep mountains and beautiful fjords, Tromso is the place with the highest probability of spotting aurora borealis.

The next day, as usual, I spent quite a long time in bed, trying to adjust my jetlag and to rest for the aurora chasing tour that Katherin already arranged for me. When the night came, I got prepared for the show: a pair of wool socks, gloves, sweater, heat packs and thermal suit, as the weather could drop below 0 degree Celsius.

The guide gave a call to Kathrin upon arrival. I piled into a van with the other 7 guests and we were off on the Northern Lights trail.

Andrea, our guide and driver, told us he doesn’t have any pre-planned locations to go, and that all is based on weather forecasts. Throughout the night he was constantly in contact with other guides to coordinate the best viewing spots and to maximize our chances of seeing the Lights. I had no idea where we were, he was just continuously driving and changing directions depending on the sky’s visibility.

After maybe an hour of driving around, we got to a remote valley, away from the city light pollution. We finally settled down in a picturesque spot where Andrea made a campfire and prepared some BBQ sausages with hot coffee and tea. He also told us that patience was the key because the ultimate show is coming only around midnight.

We were getting closer. The setting was serene. Clouds began to separate, the sky opened up and the aurora borealis finally appeared. Soon, the sky was fully clear and the show was on. The green lady started to dance. It was like watching a ballet show, with the whole sky dancing. The photo camera can capture a wonderful picture, but what you see from your eyes is uncomparable.

The movement of the lights that enveloped the whole sky was just phenomenal. It was both a peaceful and intense moment at the same time. Throughout the night, the green lady was dancing on and off. Watching a natural phenomenon in front of you at a northern side of the planet is such a remarkable experience. You have to witness this magical show on your own.

We didn’t realize how time has passed by. I started to feel cold and I put on the thermal suit that Kathrin gave me. Some of the guests went inside the van because of the freezing weather. Andrea informed us it was -10 degrees Celsius. So thankful I was having such a caring host. She even called him to ensure I was doing fine.

It was a happy ending with the wonderful aurora dancing, that gave us a nice farewell vibe.

I continued my journey to Lofoten Island, and I was lucky enough to view the aurora for another 2 nights. Well, nothing to complain about, with such a stunning schedule. My only regret is that I don’t have a tripod and I couldn’t take my own pictures. This is probably a serious reason to come back again and capture the aurora on my own.

P.S. I have to say  “Thank you” for these pictures to my friend Zee Eng, who stayed with me at Katherine’s place in Tromso, and to Andrea, my tour guide who did a great job with chasing and witnessing those unique moments.

This article was written by Ng Siew Cheng, my Malaysian friend, whom I met in 2009 in Kuala Lumpur.  She is a Lecturer for Tourism and Business Events at a University and also a Tour Planner in KL.  A Thai cuisine lover, she goes to her neighbor’s country every time she misses the mango sticky rice.