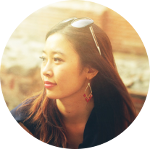 I tried not to be an intruder, I tried to avoid a simple tourist perspective. The kids are not exhibitors – that was the first lesson I learned in Cambodia.

A Few months ago I was thinking to start a photography project in South Asia, in order to raise financial support for from the outside world especially for the children. While traveling there I become unsure if the answer lays with money or with better education. Sure, money helps, but I trust that education hold the key for a sustainable solution. It is so hard to judge people who might not afford sometimes the basics of living.

I was wandering in the most hustle and bustle street, the vendors were trying to get my attention and so were the tuk tuk drivers. I still remember the weather, it was perfect, full of serenity and warmth, like every generous smile from a Cambodian. A little boy approached me . He was around 7 or 8. “Mam, I don’t want money, I only need some milk” he said.  “No, I don’t have milk”, I replied.  All of a sudden his humble begging attitude changed into resent and swore at me. He washed away slowly into a side alley leaving me all in shock.

As I was sitting in a tuk tuk some kids came to me trying to sell me souvenir postcard and magnets; their were roughly 8 or 9 years old but without their parents around. One of them kept repeating in English: “postcard,postcard! only one dollar, look, one, two, three…..ten” and the other one said exactly the same but in Chinese with the same lucrative attitude , thinking he might be more convincing. I tried to speak both English and Chinese back to them, but I didn’t get any response but “one dollar only, one, two, three, four……ten.”

I felt really sad and didn’t buy anything from them and they were gone, but I could still hear the counting in the air along with my overwhelming sense of loss.

Before I went to Cambodia, I read some articles about the giving and receiving in this country. Many tourists give children candies or pencils out of compassion; but in my opinion, this action will simply encourage the kids to beg for what they want, instead of working (and by this i mean study first ) for what they want. Watching these children walking barefoot under the blazing sun, trying to get tourists’ attention and dollars, hit me hard, filled me with compassion.

We are not really helping them either by buying the souvenirs from the kids or giving them candies or pencils.
The appropriate way I believe is giving utilities like pencils or donating money to the organisations or schools, and hopefully they will have the correct values toward to life more than the purchasing money itself.

On my last day in Cambodia, I went outside Siem Reap, to get a glimpse of how the rural life truly is. The houses were made of wood; we drove nearby the navy blue river along the rice field. There were some chickens running around, geese were queuing up to find their way home while wild birds were filling the air with their songs. The villages were not easy to be found. The road was sandy and bumpy, I had to cover my mouth and nose, protect my twisted waist that I hurt few days before; we were driving through small, nearly invisible dirt roads, the sunlight went through the chink of the tree leaves and dropped mottled shadows gently on me.

Suddenly some kids came to me with their pure joyful smile, they didn’t seem to have anything but their innocent heart , they said “Joom reab sou” (“Good day”) to me with a very generous smile. They went on their way giggling in the distance.

On my way back to the city, I  saw three boys holding each other’s hand, as if angels would laughs and dance with joy.

I tried not to take photos, like some kinds of rich people swaggering through the street and drove away; we were the intruders no matter how we tried not to be, it can be just simply we are from different countries.

Their happy smiley faces are still so vivid in my memory.